BURLINGTON, VT – Burlington Telecom has gifted some critical equipment for major events and competitions to the Champlain College Esports club.

Esports are a form of organized multiplayer video game competitions. While skeptics may scoff at the idea of a competitive arm of online gaming as a “sport”, this past August, CNN called esports an “explosive billion-dollar industry” with over 380 million spectators worldwide. By offering degrees in game design, programming, and production management Champlain College is positioned to attract top esports student talent.

Burlington Telecom began sponsoring the club’s competitive teams last year and has now built a custom mobile local area networking (LAN) switch to allow seamless networking for up to 48 gamers on and off campus. 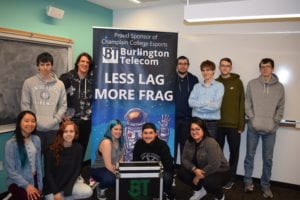 “Video gaming has been a popular activity for a long time,” says Burlington Telecom’s Sean Kio, “but esports is just now emerging as a competitive event at the college level and the students at Champlain College have been actively engaged from the start in this emerging field. Interactive gaming relies heavily on a fast and reliable internet connection, which is what Burlington Telecom does best. This gigabit capable networking device provides the fast, steady, and energy efficient connection gamers need.”

As with any competition, be it on a turf or virtual playing field, participating students develop qualities and skills needed in a modern workforce such as leadership, communication, perseverance, and determination. The Champlain College Esports team competes with students at other academic institutions and team members are held to similar academic and rules as collegiate athletics.

Champlain College Esports is currently building an esports space on campus, which will feature a competition and practice setting along with a comfortable vibe. Currently there are 150 active club members. Said Champlain College Esports President Zynab Makki, “My hope for the esports program is to continue to expand and establish Champlain Colleges Esports as a major competitor in esports. Having sponsors like Burlington Telecom really helps us grow and reach audiences beyond the college.”